Fjords and Mysterious Island
Yttygran, Arakamchechen, and Nuneangan Islands
Senyavin Strait is believed to be the most picturesque place along the entire Chukotka coast, with lots of fjords (Rumilet, Aboleshev, Penkigney) from one side and beautiful islands from the other.

The most famous island is called Yttygran.

It occupies a territory of 55 sq. km. The highest point is Mount Yttygran, 545 m high. In the Chukcha language, the word "Yttygran" means "wolf’s den," while in Eskimo it stands for "meat pit."

According to another version, the island took its name from a Chukcha word "midway dwelling." When hunters—on their dog sleds or kayaks—were travelling from Chaplino to Yanrakynnot, they possibly stopped at that island. Here is where they kept their meat and hunted down sea mammals.

From the sea, the coastline is made of steep cliffs, which plunge straight into the water. But on the other side, closer to the neighboring island of Arakamchechen, the mount gently slopes down to the pebble beach in the bay. The shore is rather convenient here, which is why the locals chose the island as a place for transportation and storage of their hunt.

There are two small lakes on the island—Sredneye and Kamalikakh.

But it’s not lakes or mountains that make Yttygran so special: the real reason to see the island is the mysterious Whale Bone Alley, an ancient Eskimo structure made of giant bowhead whales' skulls and jawbones firmly embedded in the ground. 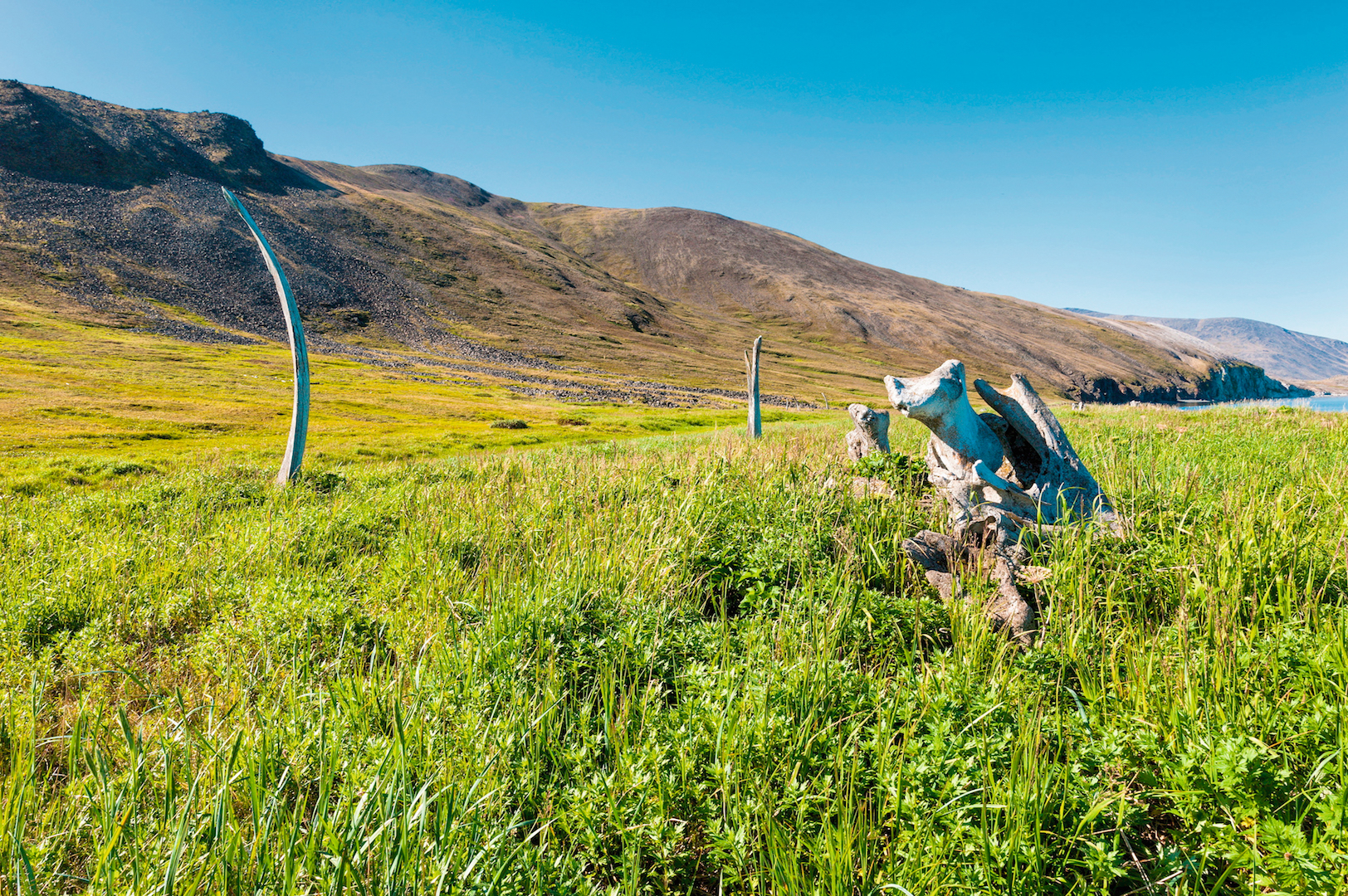 The closest row to the shore is made of whale skulls with each of them more than 2 m large. They protrude about 1.5 m above the earth. The next row runs parallel to the first one; this time, it’s made of huge jawbones—0.5 m in diameter—rising to a height of almost 5 m.

Between those rows of skulls and bones, there are about 150 meat storage pits.

The use of whale bones and jaws is quite typical for ancient Eskimo villages: they served as meat-drying racks or a framework for huts. But in no village would you find that many bones. Moreover, a typical, "household" whalebone is less than 2 m high.

What leaves scientists completely baffled is that the local Eskimo pay no attention to the bones from Yttygran. Usually, the Eskimo honor their ancestors. For some reason, however, they prefer to stay aside from that whale bone religious structure.

That’s why all the theories about the purpose of that place remain unconfirmed. Most scientists assume the Whale Bone Alley was a sacred place where the ancient Eskimo held their rites and festivities.

Scientists presume that the sanctuary was constructed in the 14th century. After the 16th century, it was abandoned and forgotten, only to be discovered by archaeologists in 1977.

From the shore, you can catch a glimpse of a whale’s tail or blowing water in the air. The sea around the island is rather shallow, and gray whales come here to forage. In addition to that species, you can spot here orcas, belugas, and bowhead whales.

It is even possible to come very close to them on a boat. 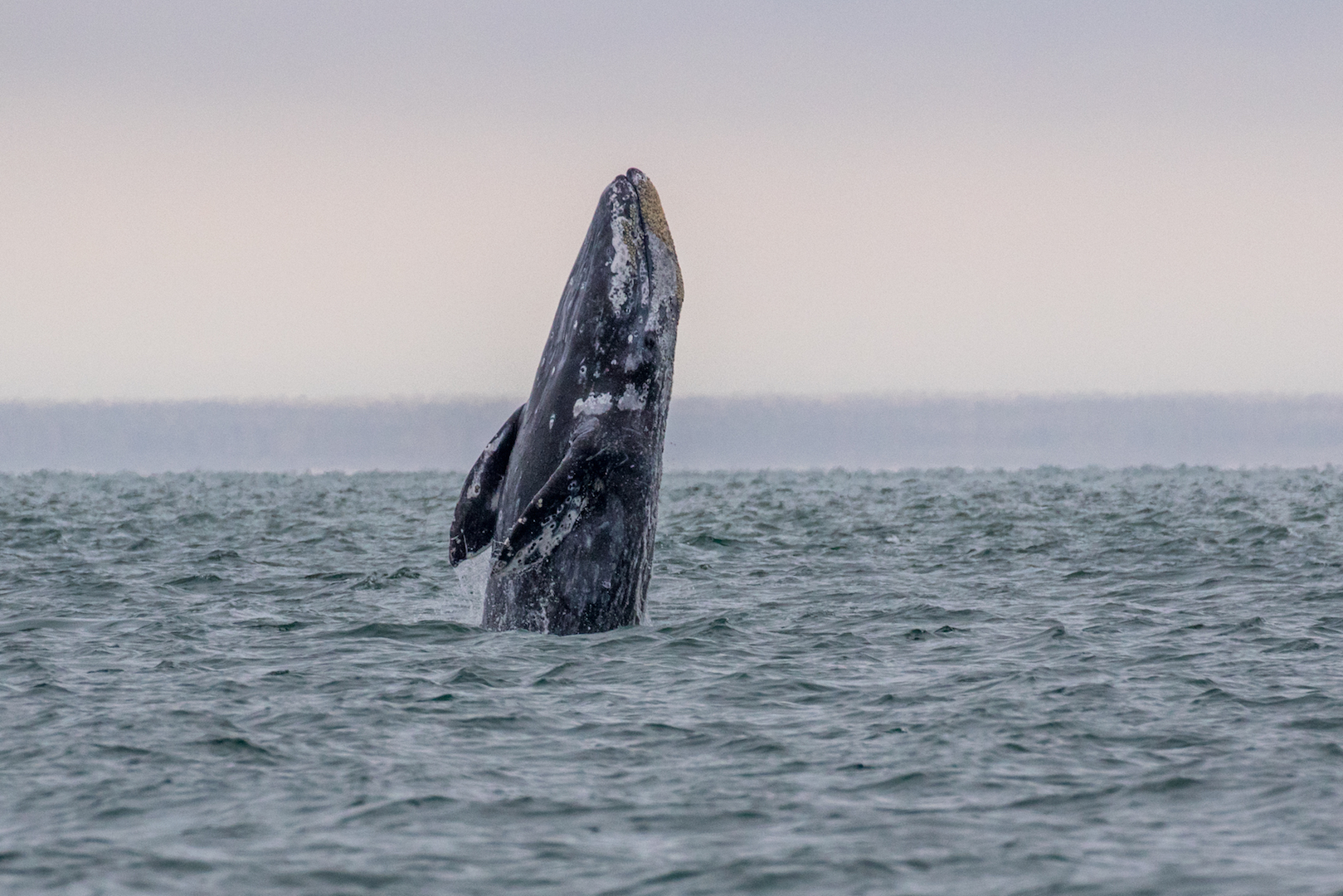 Rocky promontories of Yttygran are home for cormorants, seagulls, and tufted puffins. In total, there are about 10,000 birds that live here.

About 5 km to the east from Yttygran, there is a rocky island of Nuneangan. The waters here are shallow and rich in plankton, which makes them so attractive for gray and bowhead whales.

The island itself provides a breeding ground for 40,000 of marine birds. There are eight different species, including large seagulls, tufted puffins, and horned puffins, but the most common birds are the murre and Baird's cormorant.

At 3.5 km from Yttygran, there is Arakamchechen, an inhabited island of 35 sq. km and a part of Beringia National Park. The highest point of the island is Mount Atos (613 m). In the winter, when the strait is covered with ice, the Chukcha come to Arakamchechen with their herds of reindeer.

They used to call the island the "far-away land," but in the 19th century it got another name, which can be translated from the local language as "deceptive place that makes you wander." The reason being, the island is often shrouded in thick fog, and travelers can take a wrong path easily. 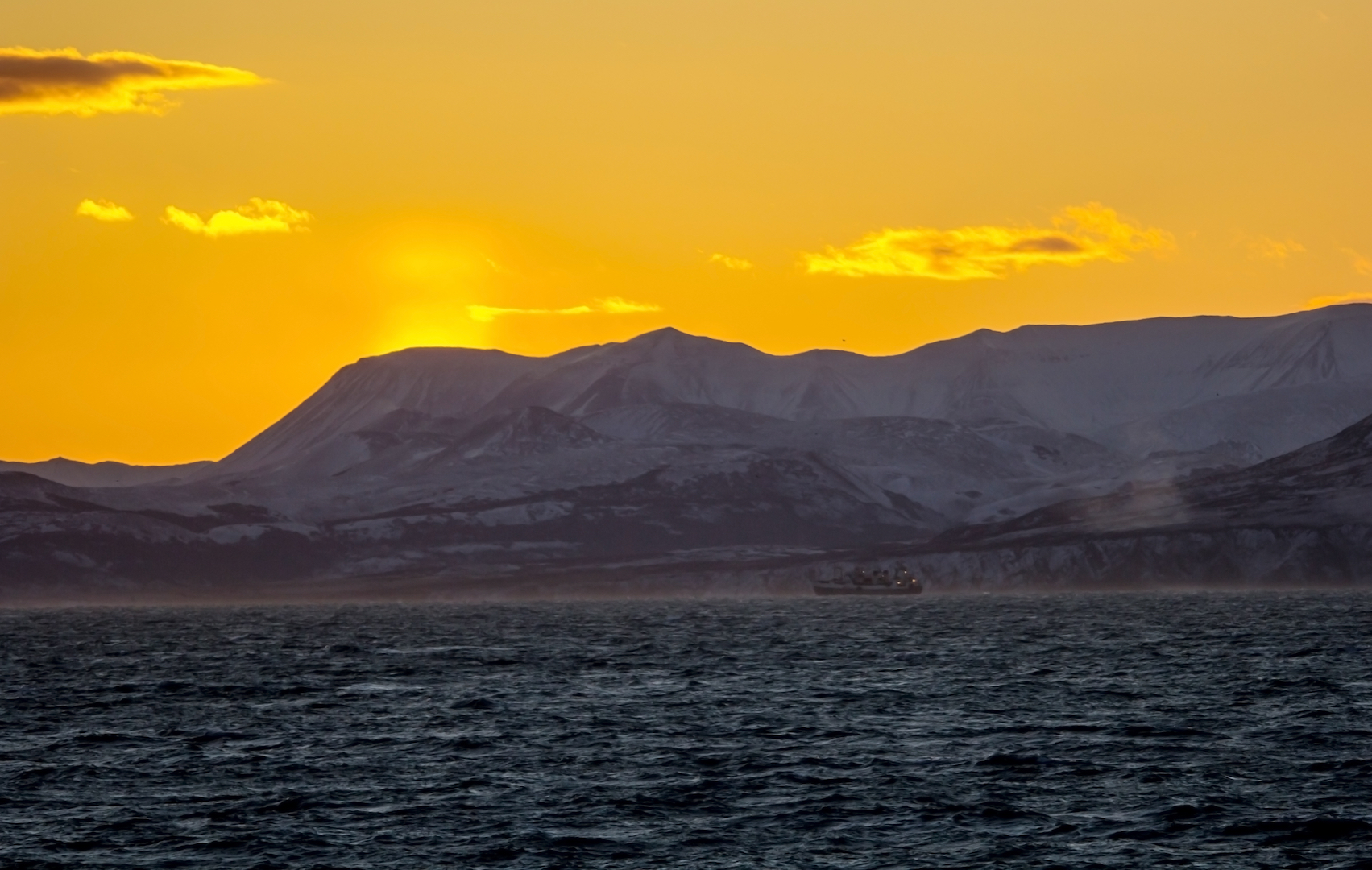 Arakamchechen is famous for its walrus rookery. Up to 50,000 walruses come here in August and September. More and more of them are swinging on the waves or coming back to the shore. Sometimes, the whole rookery seems to turn into a huge golden tapestry embroidered with countless tusks.

Even the rarest white walrus has been recorded to visit the island.

There are a lot of birds nesting in the rocky capes of Arakamchechen: Baird's cormorants, glaucous gulls, European herring gulls, kittiwakes, murres, pigeon guillemots, horned and tufted puffins. A swampy plain with shallow lakes, situated in the Eastern part of the island, serve as a resting site for migrating birds, including the snow goose and sandhill crane.

The lakes of Arakamchechen are home to the Alaska blackfish. In the creeks, one can notice pink and sockeye salmon, chars, and Dolly Varden trouts.

In the Western part of the island, close to Kygynin Cape, there are traces of ancient Eskimo dwellings more than 2,000 years old.

The easiest way to reach the islands is to take a sea cruise. Another option is to come here by boat—or on foot, if in the winter—from Yanrakynnot (located 85 km away from Provideniya, accessible by rover, helicopter, or boat). 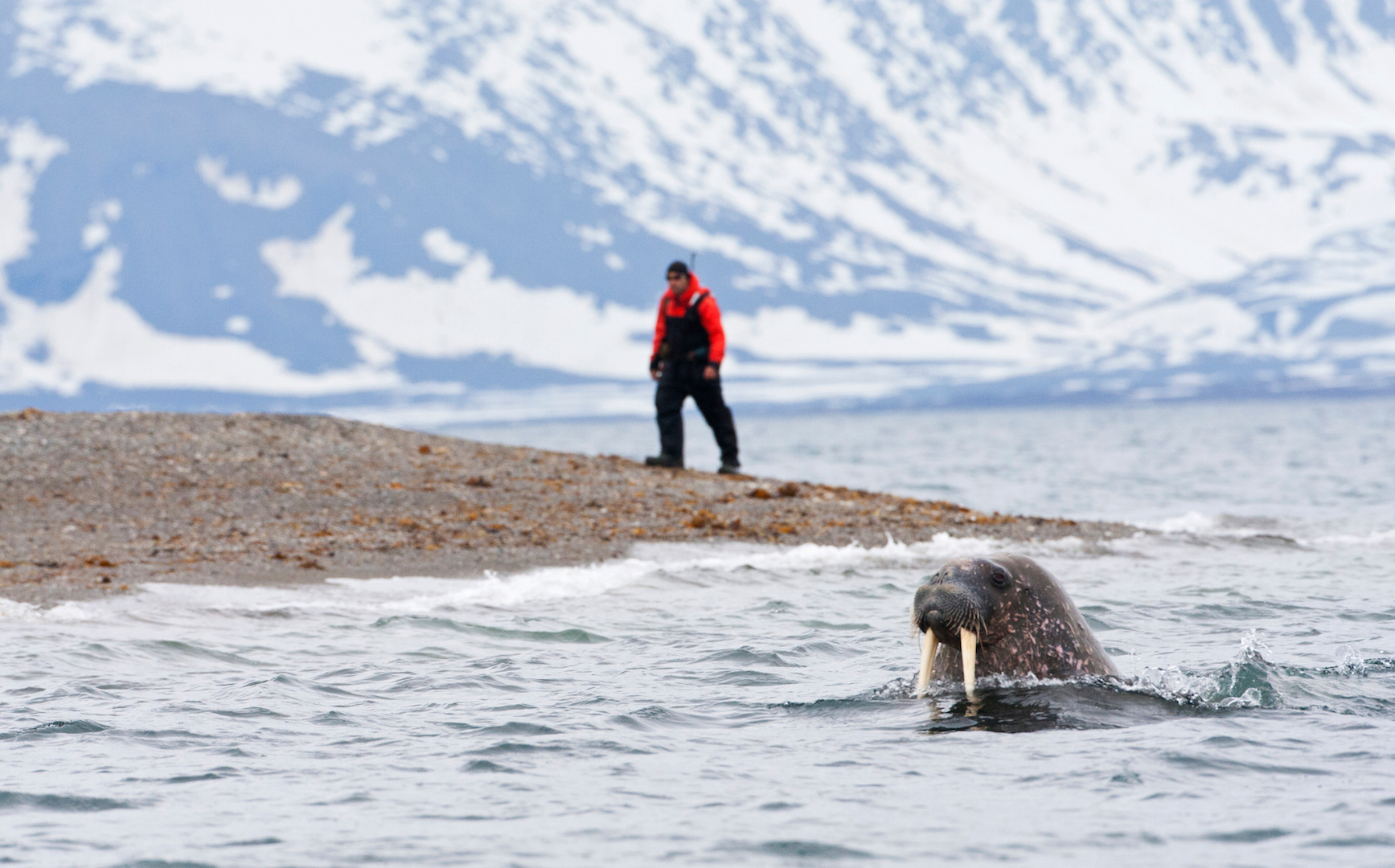